take 1-2 dropper fulls each day — under your tongue or added into your drink of choice.

the story of what's inside 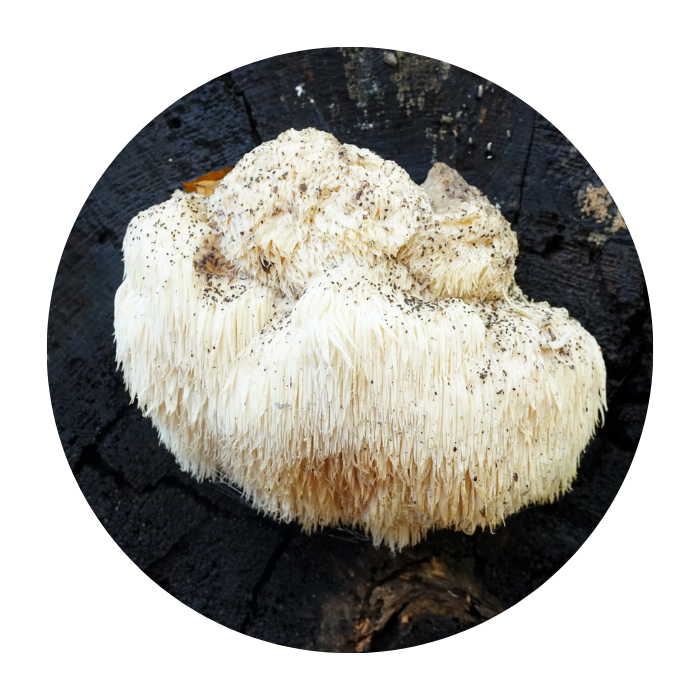 the story of lion's mane

lion’s mane, like many functional mushrooms, dates back to the origins of traditional chinese medicine where it was said to be nutritious and beneficial for the major internal organs: liver, spleen, lung, heart, kidneys.

it was championed by ancient healers for its ability to support and nourish qi (life force).

in the mountains of the east, buddhist monks were known to celebrate this mushroom. they would use powdered lion’s mane to heighten their focus during meditation.

and in japan, this bearded tooth fungus is nicknamed yamabushitake, a nod to buddhist monks meaning “those who sleep in the mountains.”

but besides being a wonderful source of medicinal compounds that support your brain, this mushroom is enjoyed as a delicacy, too. you might have even seen vegan star tabitha brown’s recipe for lion’s mane crab cakes.

organic and sourced from farmers growing mushrooms in open air rather than labs, and on wood substrates instead of rice.

we use only the fruiting body of the lion’s mane mushroom, and perform dual extractions with organic cane alcohol and spring water. 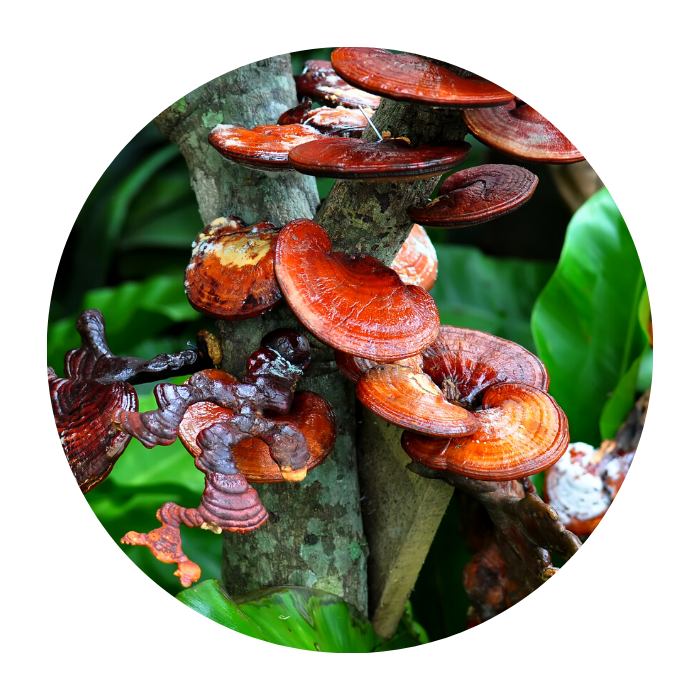 the story of reishi

the story of reishi dates back thousands of years to the han dynasty in china. it is here that chinese healers first proclaimed reishi as the “elixir of immortality” due to its multitude of medicinal benefits.

it is included in the shen nong ben cao jing, China’s oldest medical text (~200 C.E.). the text breaks down 365 herbs into three categories: superior, fair, and average. reishi is classified under superior, and ranked #1.

in the northeast of china exists the frigid, cold conditions of the changbai mountains. but the temperate forest systems at the base of this mountain chain is where reishi was originally found. it grows on mature trees and fallen logs — oak and maple trees are the most common.

from its discovery, reishi has been revered by healers for its properties from anti-aging to use as a lucky charm.

the respect for reishi was so deep in the circles of chinese daoist monks that they believed it to have the power to forever protect one’s health and connect with spirit. they considered it to be a shen tonic, which literally translates to “soul nourishment.”

organic and sourced from farmers growing mushrooms in open air rather than labs, and on wood substrates instead of rice.

we use the fruiting body only, which contains polysaccharides (beta-glucans) without any of the unnecessary filler or starches that come from mycelium grown on rice substrates. we perform dual extractions with organic cane alcohol and spring water.

a functional mushroom for protecting you from environmental stress 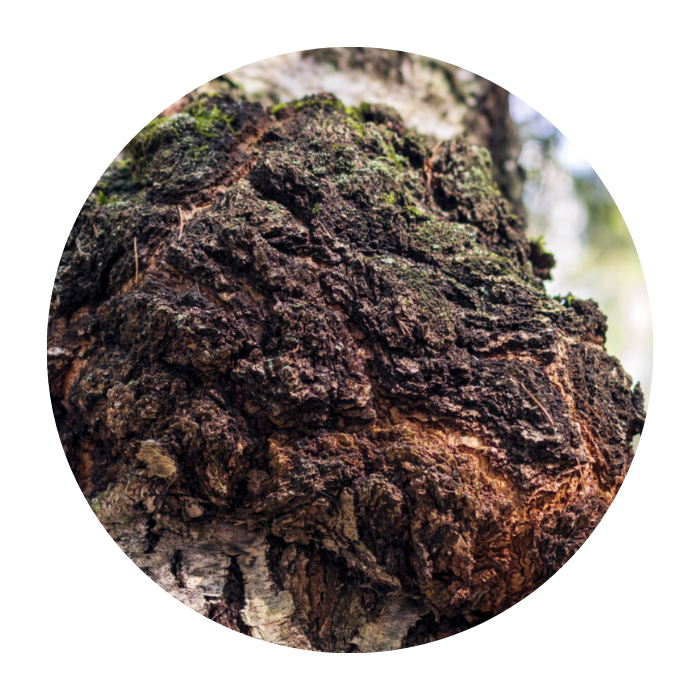 the story of chaga

for indigenous peoples of north america and northern eurasia, the medicinal properties of chaga have been known for centuries.

in the extreme climates of the boreal forests and tundra, chaga evolved to cope with these environmental conditions. its flammability (🔥) helped nomadic tribes combat the harsh winters and migrate further, allowing them to populate the ancient northern regions of the world.

chaga contains such potent medicine because of its parasitic relationship to the trees it grows on. for its entire life span, chaga is in constant battle with its preferred host, typically the birch tree. the tree’s immune system spends its time attempting to attack and kill chaga.

but, quite literally, everything is trying to kill chaga — from the environment that it lives in, to the trees that it grows on. in order to survive, chaga has developed an incredibly sophisticated immune system, which operates using potent medicinal compounds. it’s these compounds — some of which can only be found in chaga — that are so fantastic for the human immune system and brain.

note that what we know as chaga is not technically a mushroom. it’s actually a sclerotium, or mass of mycelium containing the reproductive material of the fungus, which grows on a tree. it’s hard like a rock and mostly dark brown to black, thanks to high levels of melanin.

only chaga that is wild harvested is medicinally active. in fact, when scientists have tried to cultivate chaga in a lab, the medicinal compounds are virtually non-existent. so, it is imperative to practice sustainable harvesting methods and protect the boreal forests where wild chaga is found. 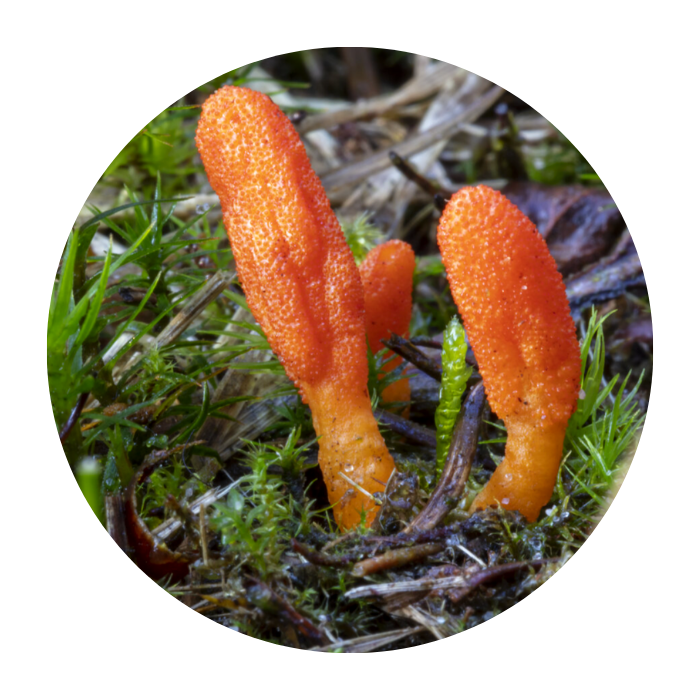 the story of cordyceps

welcome to the incredibly magical world of cordyceps, a zombie-like fungus that takes over the consciousness of an invertebrate insect in order to reproduce.

cordyceps preys on specific insect larva. the mycelium takes control of its nervous system, and repositions the insect’s body in a way that will maximize the release of its spores and improve its reproductive potential.

finding cordyceps in the wild is rare, and its increasing popularity makes it one of the most expensive herbal medicines on the planet.

it’s been used for thousands of years in traditional medicine circles to regenerate both the yin and yang parts of our core essence, our jing. jing represents vitality, youth, and resilience — strong jing means improved fertility, improved sex lives.

and its benefits are far reaching beyond the bedroom.

it is essential in helping the body react to, handle, and heal from stress, a necessity for modern life (😥).

and arguably even more important, cordyceps is hugely beneficial in helping glucose (energy!) get to your cells. more energy to cells means a boost in ATP production. and what is ATP production for? it’s needed to fuel every biochemical reaction in each cell of the body — especially your brain cells.

cordyceps in the wild grows parasitically on insects. the resulting fungus is endangered due to over-harvesting, threatening the biodiversity of the tibetan plateau.

we use cordyceps militaris, a strain of cordyceps whose fruiting bodies can be cultivated humanely. this methodology is completely vegan, cruelty-free, and sustainable. 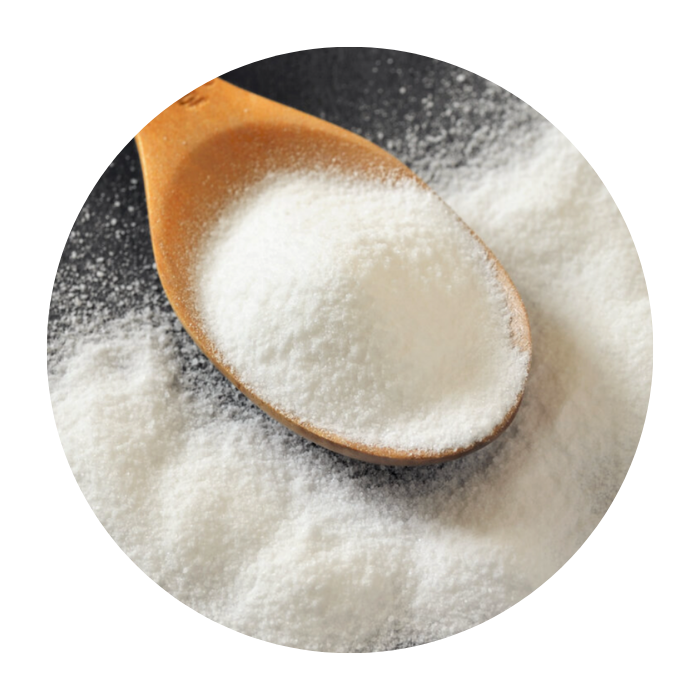 the story of niacin

niacin is vitamin b3. humans produce it naturally from the amino acid tryptophan. it’s also found in a variety of natural sources — from corn to brown rice to leafy greens to nuts, legumes, and bananas.

oh, and niacin naturally occurs in mushrooms. the mushies use it to create and maintain their own chemical pathways that help it grow, move, and adapt to their surroundings.

but the discovery of niacin wasn’t until the late 1800s, when it was synthesized through the oxidation of nicotine. as an aside, nicotine is an alkaloid found in tobacco leaves, and has been used by humans for thousands of years for its psychoactive properties.

today, niacin is known to be hugely beneficial for the brain, especially in terms of neuronal cell protection.

niacin is a precursor to the coenzyme nicotinamide adenine dinucleotide (NAD). NAD is essential for proper metabolism, and required for cell signaling and DNA repair.

but NAD also converts to NADH, which allows the body to create and store ATP. it is the fuel source for every single cell in the body, especially brain cells.

niacin is one of our only ingredients that isn’t a plant or mushroom, but is essential to the nootropic stack. our niacin is pharmaceutical grade and beyond organic.
it is third-party lab-tested for absolute purity — the best available to human beings.